Harvest One Cannabis Inc. (TSXV:HVT) ("Harvest One" or the "Company") through its wholly-owned subsidiary United Greeneries ("United Greeneries" or "UG”) is pleased to announce its expansion targets of 20,000kg dried cannabis flower capacity by YE 2018 and 70,000kg dried flower capacity by YE 2019 which is anticipated to be fully funded by the Company's existing cash position of approximately $80m.

The Lucky Lake facility, located close to Saskatoon, Saskatchewan, is a 62,000 sq ft concrete agricultural facility sitting on over 18 acres of land, purchased by the Company in 2014. With the recent announcement by the Saskatchewan provincial government with respect to cannabis legalization, UG is now advancing Lucky Lake through the final stages of approval with Health Canada and expects initial licensing under the ACMPR to occur in Q3 2018.

United Greeneries is deploying a specialized modular building system to construct two levels of internal growing rooms within the facility, creating over 80,000 sq ft of actual growing space with an estimated total capacity of 12,000kg of dried cannabis flowers per annum.  The Company has taken immediate steps to prepare the site for a staged modular build out and expects to reach maximum production capability by YE 2018, subject to regulatory approval. Due to the completion of recent financings UG has opted not to proceed with the previously announced interim agreements with Cannabis Wheaton. 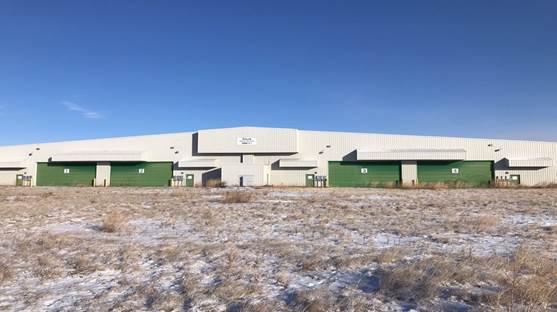 The Chemainus, BC facility is located approximately 10 minutes from United Greeneries primary cultivation facility in Duncan on Vancouver Island. The property is ideally suited to repurpose into a cannabis cultivation facility due to its existing building envelopes and electrical power infrastructure. With a similar modular build-out to Lucky Lake, UG expects an efficient and short construction timeline period, with cultivation activities to commence in late 2018, subject to applicable regulatory approvals. The facility design allows for high-quality indoor production of dried cannabis flowers with a total annual production capacity of approximately 8,000kg. 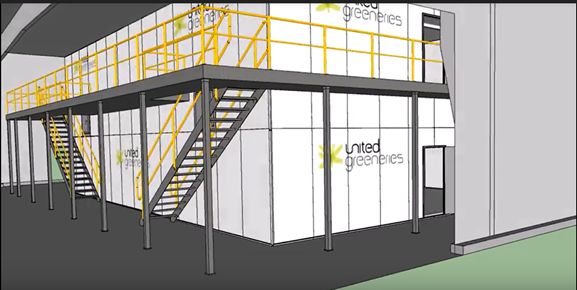 In order to optimize operational procedures, UG has commenced a 15,000 sq feet expansion plan at its current Duncan, BC facility. The new building addition will accommodate a sophisticated and innovative propagation system, designed to rapidly produce large quantities of rooted cuttings and pre-grown starter plants for all of the Company’s facilities. As the expansion of the Duncan site constitutes an amendment to the United Greeneries’ existing ACMPR license, the Company expects licensing of the new building addition by Health Canada upon completion of the proposed infrastructure in Q2 2018.

The Duncan site will also be home to a processing, extraction and distribution centre capable of handling the production volume from all of the Company’s facilities as well as an advanced R&D laboratory, designed to develop and test new and innovative products in anticipation of regulatory changes.

UG previously announced the preparation of the largest legal outdoor grow operation in Canada, subject to regulatory approval. The Company is pleased to announce that UG has closed the previously-announced purchase of for 398 acres of agricultural land (the “Property”) in British Columbia. Once built out to its maximum capacity, it is estimated that up to 50,000kg of dried cannabis flowers will be grown on the site by year end 2019. UG believes the Property may potentially provide some of the best cannabis climate growing conditions in a federally regulated environment on a global scale and confidently expects that the large-scale outdoor production of premium flowers will significantly reduce production costs compared to indoor cultivation.

The outdoor growing program will enable UG to introduce a number of highly desirable cannabis varieties to the market that are not currently available from indoor or greenhouse production schemes. UG owns over 32 select different commercial cannabis cultivars, several of them specifically bred and selected for outdoor growing.

“Following on our most recent bought deal financing, the company is well positioned to execute fully on all our expansion plans within the fastest possible time, as all our capital expenses and operating costs for the next two years are covered,” said Andreas Gedeon, CEO of Harvest One. “We are now fully focused on execution in all our business units and will continue to concentrate on creating shareholders substantial and sustainable value. Harvest One continues to evaluate strategic investments that will provide long term shareholder value as the global cannabis market matures.”

The Company cautions investors that outdoor growing of cannabis is not currently permitted by Health Canada under the ACMPR. While the federal government of Canada has introduced consultations regarding the proposed implementation of outdoor growing licenses in connection with legislation legalizing recreational cannabis, there can be no assurance that such legislation, if passed, would permit outdoor growing as contemplated herein or at all.

Harvest One is a global cannabis company focused on delivering high quality, innovative cannabis products and technology to regulated markets around the world. Our shareholders have significant exposure to the entire cannabis value chain through three business units, with Harvest One serving as the parent company over horticultural arm United Greeneries and medical arm Satipharm AG. Harvest One’s businesses are all strategically located in favourable jurisdictions with supportive regulatory frameworks in place. United Greeneries has a Canadian ACMPR cultivation and sales license, making Harvest One a unique global company with the capacity to commercially cultivate and sell medicinal grade cannabis in a federally regulated environment.

Neither TSX-V nor its Regulation Services Provider (as that term is defined in the policies of the TSX-V) accept responsibility for the adequacy or accuracy of this release.